The Apple of Steve Jobs’ Eye

Simon Knight
Self-proclaimed analysis master and a dad of 2.
Steve Jobs is one of those people who don’t need any introductions. And yet, not everyone knows how he managed to become a legend and one of the symbols of the IT-industry. So let’s have a look at his life as if it was a chart.

Numerous documentaries and articles describe the life of Steve Jobs, but what if we break it down to the essentials? Meet our creative invention: an iBiography, where we take the highest and lowest points in a person’s life and turn them into a chart. 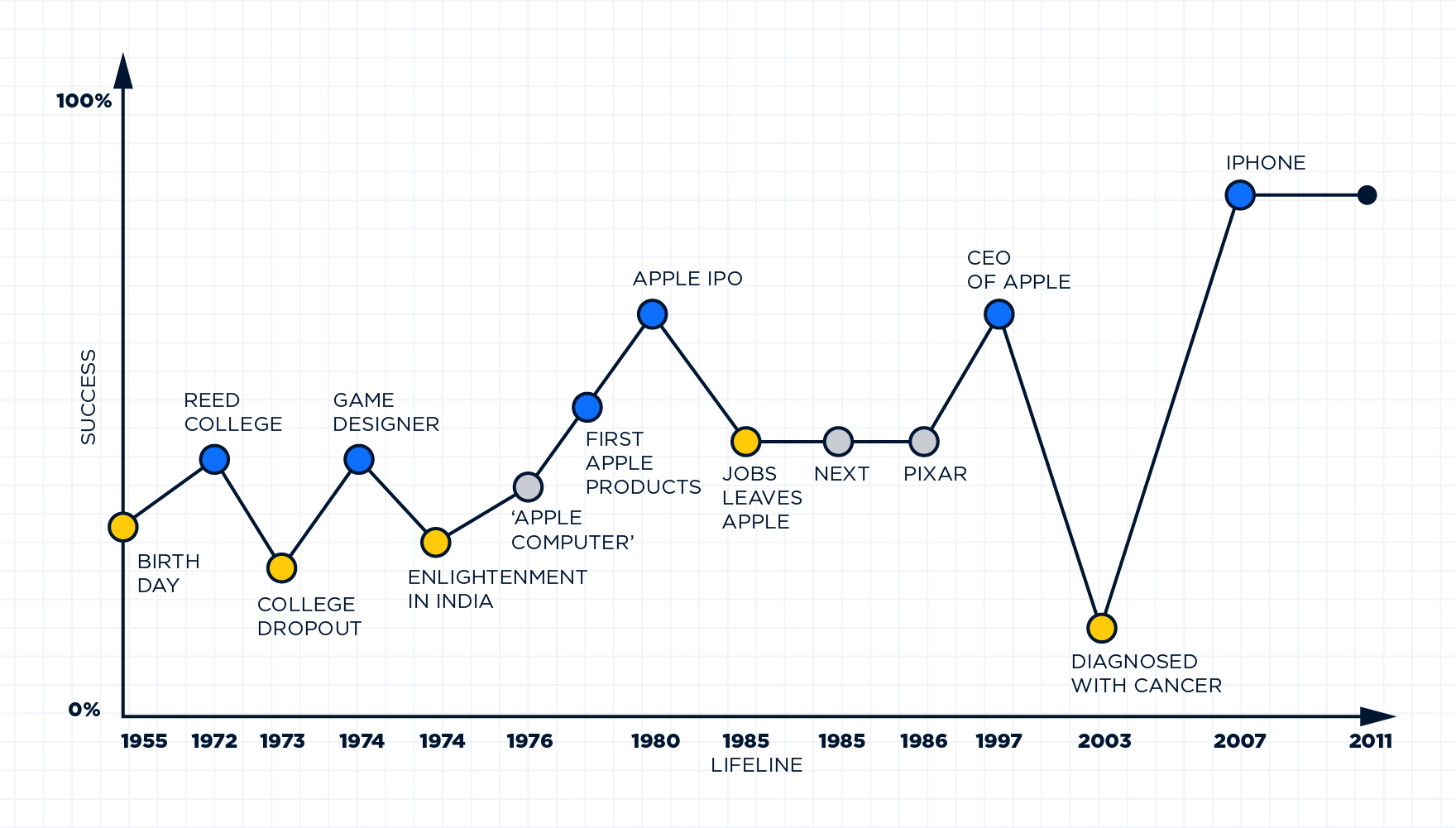 Starting point: Right after his birth, Steve was put up for adoption. Adopted by the Jobs family, he grew up in Cupertino, California, later known as the Silicon Valley. His father was an avid fan of electronics and made sure that he showed his son how to take apart and reconstruct different devices, and young Steven Jobs was quick to dive into this hobby which helped him a lot in the future.

Lower point: Although he was a smart student, Steve Jobs struggled with the discipline and was known as the residential prankster among his school peers. At one point, his teachers had to bribe him to study properly.

Higher point: In 1972, he enrolled at Reed College in Portland, Oregon.

Lower point: He dropped out 18 months later and started taking random creative classes. None of them was to his liking.

High point: In 1974, he became a game designer with Atari.

Lower point: He quit a few months later to move to India. There he sought spiritual enlightenment and experimented with psychedelic drugs. It is unknown whether he reached the enlightenment, but he did come back to the US with some ideas regarding his new business.

Neutral point: In 1976, Steve Jobs and his former high-school classmate Steve Wozniak started their own company. They called it ‘Apple Computer’ and placed their headquarters right in the Jobs family garage. The start-up budget: a Volkswagen bus and a scientific calculator sold to fund the future company.

High point: Thus begins the series of computers Wozniak and Jobs produced and marketed in tandem:

Higher point: In 1980, Apple Computer became a publicly-traded company. Just within one day of trading, its value was estimated at $1.2B.

High point: In 1984, the Macintosh was released, immediately boosting Apple Computer sales and making it the leader of the industry.

Low point: Despite the company’s success, Steve Jobs struggled to keep a good relationship with the executives. Internal conflicts left him no choice but to leave Apple in 1985.

Neutral points: In the following years, Steve Jobs had a hand in several projects in different spheres:

High point: In 1997, Steve Jobs came back to Apple and took over the company as the CEO. With his return to the company, quite a lot of changes ensued, instantly bringing Apple to the top of the industry and, eventually, making it great again. Moreover, a lot of NeXT products were integrated into future Apple products. Mac OS X, for instance, was entirely based on NeXTSTEP.

Low point: In 2003, Seve Jobs was diagnosed with cancer.

The genius that was Steve Jobs is a rare occurrence, but we all can learn from his life, his mistakes and success.

Sometimes life is going to hit you in the head with a brick. Don't lose faith.